By the end of 2018, NVIDIA released the new GPU series Turing, best known for its ability of accelerated ray tracing.

Ray tracing is the process of simulating light paths from reality. In reality, billions of rays get shot around you and at some point, hit your eyes. Up to today, simulating this process is one of the most expensive tasks in computer science and an ongoing research area.

Previously, if you were interested in modern ray tracing, then you had a giant chunk of learning material in front of you. Modern graphics APIs became a lot more complicated to work with and ray tracing was only available for these APIs. You had to spend a lot time learning about them, before you could even start about the ray tracing topic itself.

Note: If you’re not the owner of a RTX card, but have a GTX 1060+ around, then you are one of the lucky guys who can test ray tracing without the need to buy one of those more expensive cards.

WebGPU is the successor to WebGL and combines multiple graphics APIs into one, standardized API. It is said, that WebGPU’s API is a mixture of Apple’s Metal API and parts of the Vulkan API, but a lot more straightforward to work with.

Some WebGPU implementations come with multiple rendering backends, such as D3D12, Vulkan, Metal and OpenGL. Depending on the user’s setup, one of these backends get used, preferably the fastest one with the most reliability for the platform. The commands sent to WebGPU then get translated into one of these backends.

There is also a custom Chromium build with ray tracing capabilities and an online demo, which you can find here.

The specification of the ray tracing extension can be found here.

Now let me introduce you to the ideas and concepts of this new extension. Note that from now on, I will use RT when referring to ray tracing or RTX.

When dealing with RT, you often end up having to work with Bounding Volume Hierarchies (short: “BVH”). BVHs are used to encapsulate arbitrary geometry for faster ray-triangle intersection. BVHs are very important in RT, since without them, for each ray, you’d have to check all triangles in a scene for intersection with the ray and this process quickly becomes expensive.

Previously, for RT projects, you had to implement your own BVH system. Today you no longer have to do that, since the driver is generating the BVHs for you (either on CPU or GPU).

Previously, you only had vertex, fragment and compute shaders. The RT extension exposes 5 new shader stages:

For each pixel on the screen, we want to shoot rays into a scene. This shader allows to generate and trace rays into an acceleration container.

A ray can hit multiple surfaces (e.g. a triangle), but often, we’re only interested in the surface that is the closest to the ray’s origin. This shader gets invoked for the “closest surface” that got intersected with and also contains arbitary hit information.

This shader is identical to the closest-hit shader, but can get invoked multiple times.

This shader gets invoked, whenever a ray didn’t hit anything (i.e. “hit the sky”).

The most common approach about shaders is to bind them, depending on how you want an object to look like on the screen. In RT however, it’s often impossible to known upfront which shaders to bind, and which shaders should get invoked in which order. To fix this, a new concept was introduced called the shader binding table (or short “SBT”).

The SBT’s purpose is to batch shaders together into groups, and later, dynamically invoke them from the RT shaders, based on a ray’s tracing result (i.e. hit or miss a surface).

Acceleration containers probably seem to be the most complicated thing at first, but they are actually quite simple in their concept.

There are two different kinds of acceleration containers:

Generally said, a bottom-level container contains just the meshes, while a top-level containers describes, where to place these meshes in a virtual world. In fact, this process is similar to Geometry Instancing, a common approach in graphics programming, which is about effectively reusing geometry across a scene to reduce memory usage and improve performance.

After this tutorial, you will be able to render this beautiful triangle, fully ray traced with hardware acceleration: 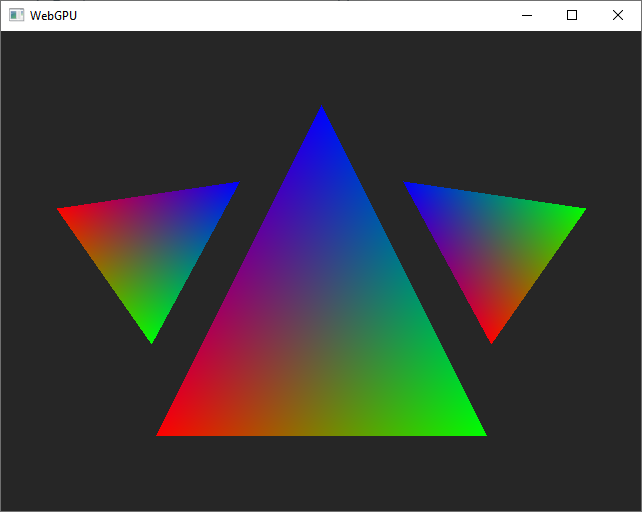 We’ll just use a simple triangle at first. Notice that for all buffers which will be used in acceleration containers later, the GPUBufferUsage.RAY_TRACING must be set.

Since you probably end up using an index buffer later anyway, let’s create one:

Now we will create our first acceleration container, which stores a reference to the geometry we have just created:

There is a new type for bind group layouts, which allows us to assign a TLAC:

When creating our bind group, we simply set the acceleration container and the pixel buffer.

RT shaders are similar to compute shaders, but when requiring the GL_EXT_ray_tracing extension, things change quite a lot. I’ll only describe the most important bits:

Gets executed for the closest intersection, relative to the ray.

Gets executed whenever a ray hit nothing at all. We simply return a gray color here.

The SBT allows to group shaders together into groups, to dynamically invoke them later.

The following shaders are supported:

In stages, you add all the shaders you want to use. In groups, you then index the shaders defined in stages and also define how each shader will be used then.

If the index in a group is -1, it means that there is no associated stage. You can also combine multiple stages into one group together, which is done e.g. for procedural hit shaders, where a hit shader is used along an intersection shader.

Note that the generalIndex is used for ray generation and ray miss shaders.

Creating the RT pipeline is straightforward. The only important property here is maxRecursionDepth, which we can use to specify upfront how many shader recursions we want to allow. Note that GPUs are bad at performing recursion, and when possible, recursive calls should be flattened into a loop. We will leave this value to 1, so we can shoot our rays in the ray generation shader.

The RT Pass’s only difference to other passes is, that we have the command traceRays, which allows us to shoot rays with a given dimension. You might find it useful to kind of think of traceRays as the dispatch command in a compute pass.

I left the part of setting up the rasterization pipeline, as it should be straightforward and only the blit shaders should be interesting.

The blit vertex shader is created like this and defines a fullscreen quad:

Note that you have to draw with a vertex count 3 to successfully run this shader. Also, make sure that your blit pass has a color attachment with the swapchain image as input.

The fragment shader is just copying the pixels of the pixel buffer into the color attachment.

Even though it’s just a simple triangle, you can do quite a lot things with them. In this tutorial, I didn’t cover the entire extension, but let me show you 3 further features, which can be quite handy: 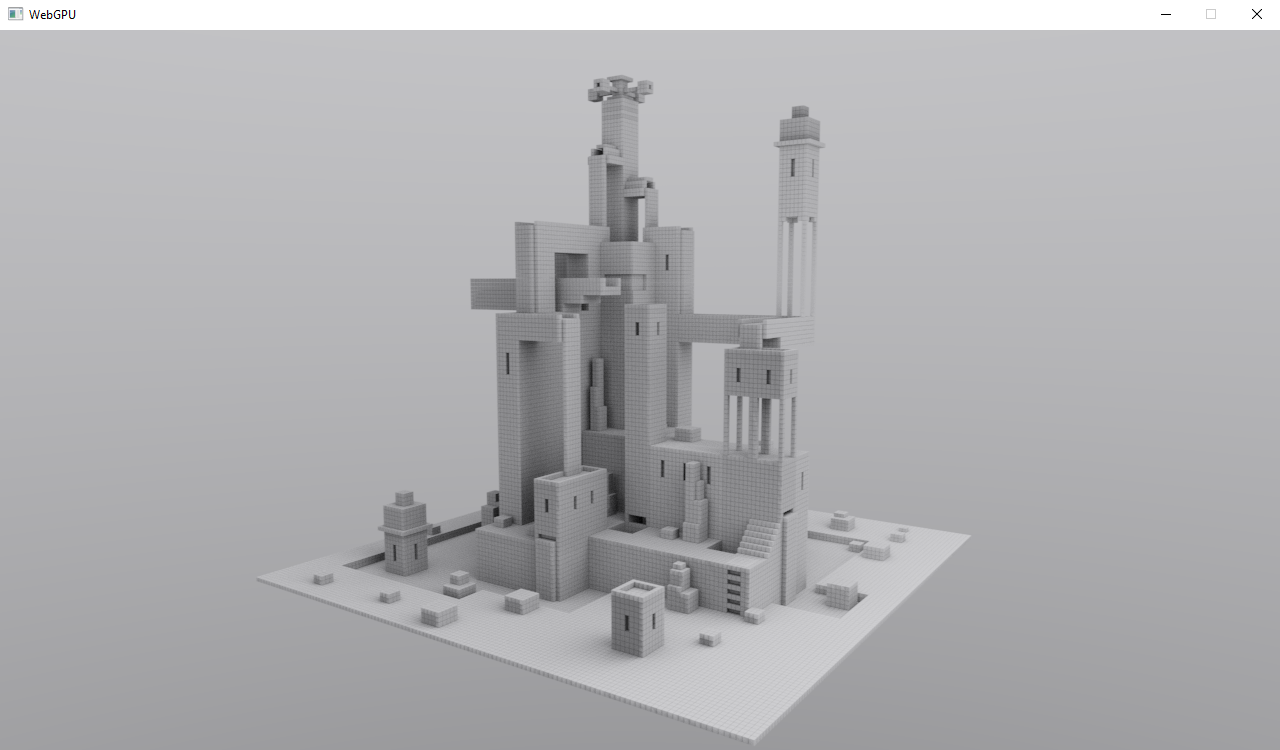 This method updates an acceleration container and can be used for BLAC and TLAC. If it’s a BLAC, then you might have updated the vertex buffer before (e.g. skeletal animation). Or in case of a TLAC, you might want to update its instances. Note that to efficiently update the instances of a TLAC, GPURayTracingAccelerationContainerDescriptor.instanceBuffer should be used.

This image is showing a quick implementation for skeletal animation, where the acceleration containers get updated each frame, and the vertex skinning is done in a compute shader. The model and the animation is taken from Unreal Engine 4.

This method allows to copy the state of an acceleration container into another container and works for both BLAC and TLAC.